How is tax handled when it is shown or not shown in client allowances?

How is tax handled when it is shown or not shown in client allowances?

On fixed price projects, CoConstruct lets you choose which of your markups, margins, and/or taxes should be included in any allowance amounts that you present to your client:

For Markup/Margin calculations that you add, the system will only allow a markup/margin to be shown in allowances if previous markup/margins are also shown. In the screenshot above, for example, if you wanted to show "Profit" in allowances, you would also need to have "Contingency" shown as well.

Taxes, however, can freely be shown in client allowances without any prior markups/margins shown. A common scenario would be to present your client with an allowance that includes sales tax, but doesn't include your profit.

You can simply check the box in the "Show in Client Allowances?" column for your tax line(s). Once you click "Save and recalculate", all of your allowance selections will reflect taxes in their amounts.

Including Tax in Allowances

This screenshot shows an example of an item using a 5% Goods and Service Tax (GST): 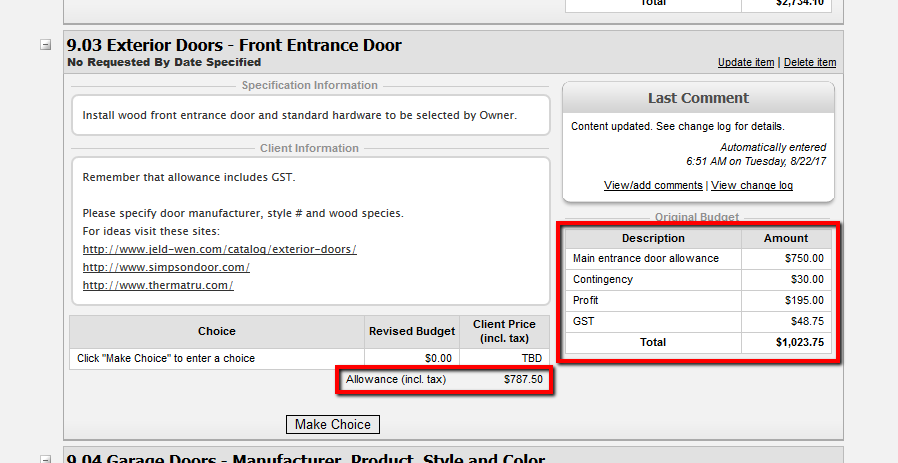 This selection item for the front doors has $750 budgeted for the doors. The client's allowance is thus $787.50 -- the original budget plus 5% GST applied to the $750 budgeted amount.

The GST also still has to apply to the Contingency and Profit, which is why the total GST amount in the Original Budget reflects $48.75.

Now, when a client makes their decision and the price of the option is entered, below is the same item with a choice made, showing the client price: 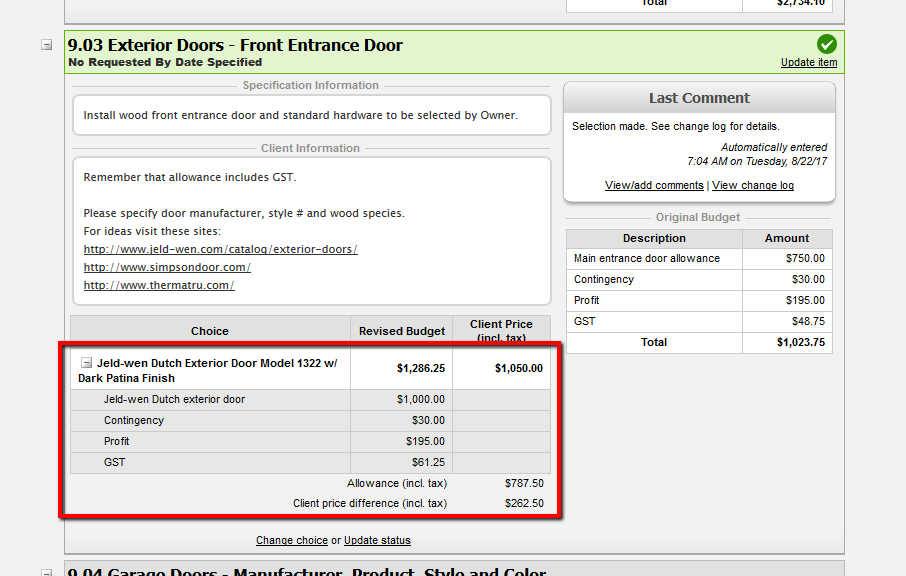 The price of the door was $1000, which exceeded the allowance given. The tax automatically reapplies to the revised budget, and presents that total as the client price.

Remember that CoConstruct does not re-apply markups that are not included in allowances, which is why the contingency and profit in the revised budget remain the same as they were in the original budget.

Not Including Tax in Allowances

This screenshot includes an example of what happens on an item when taxes are not included in allowances:

The allowance amount only displays the extended cost of the lines, as expected.

When a client makes their decision and the price of the option is entered, the below screenshot reflects the same selection item: 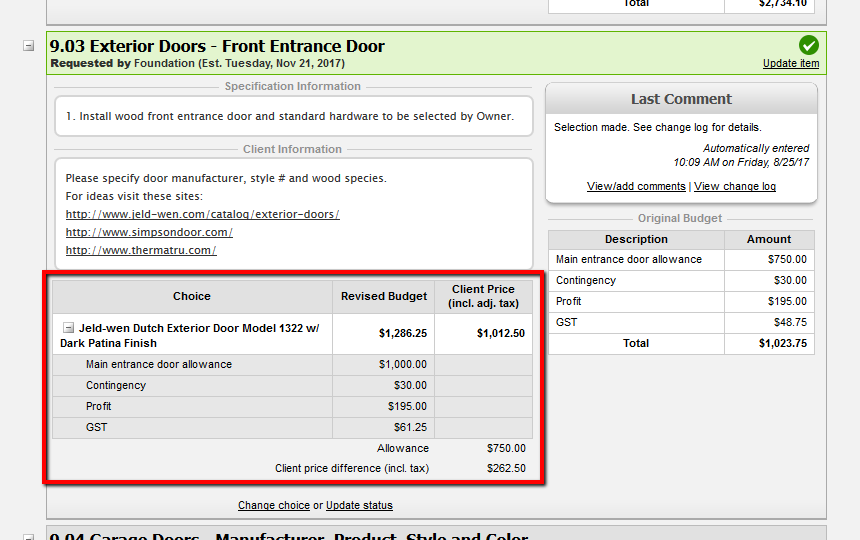 Notice that even though tax is not included in the allowance, the tax DOES recalculate according to the option's price. This is different from the markup/margin calculations, which do not change for upgrades/downgrades.

Since tax needs to be collected on the actual price of an item (whereas you may choose whether or not to collect extra profit on an overage), the tax does not become locked when the client goes above or below allowance.

Tax not shown in allowances for TBD selection choices

If you are not showing tax in allowances (i.e. you have one or more tax markups with "Show in client allowances" unchecked), then you may see pop-ups about an unsupported configuration for these scenarios:

You will always be prompted if you try to set up an unsupported configuration.

Option to Decline: You will not be able to enable this "option to decline" if you have configured your tax to not be included in your allowances. In place of an option to decline, consider adding an additional choice option with a single $0 cost line.

Show as TBD: If the costs of your choice option are zero, you can add a single $0 cost line to your choice. Otherwise, in most cases, you will have a quick way to automatically convert your choices to "Show as TBD" until you come back in and define those cost lines later.

If you have a fixed price project, and you have added a tax markup that is not shown in client allowances, then you may see those prompts when...

Build CoConstruct Fees into your Contract
Warranty overview
How do I push an invoice to QuickBooks?